What is Colloidal Silver?

A colloid is a suspension of submicroscopic particles in a medium of a different material. Colloidal silver is a metal mineral of silver suspended in water. The particle size of the silver typically ranges from 1 nanometer to 1 micrometer. These are extremely small particles in size. The quantity of silver is measured by volume in parts per million. The quantity of silver in the ImmunoBiotic is in the 10 to 30 parts of silver per one million parts of water. 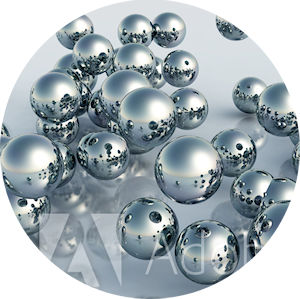 Colloidal Silver has been used for around 100 years. Knowledge of silver’s health-giving properties, however, goes back over 2000 years. Silver derived preparations were commonplace up to the 1940s until antibiotics broke onto the scene. Silver was all but forgotten. However, with the advent of Multi-drug-resistant (MDR) germs, scientists and researchers are now looking at alternatives including silver, and in particular colloidal silver due to its effectiveness against viral, fungal and yeast Infections. This has been proven in in-vitro studies.

Silver’s ability to kill single celled organisms such as bacteria, yeasts, molds and fungi is due to affect the enzyme that is responsible for the cells breathing, thereby suffocating the cells. Due to the way that silver acts on these micro-organisms they do not able to mutate to the mechanism used by silver as they do with antibiotics, which poisons the cell. Modern science has also found that silver seems to increase healing effects on people and animals when applied to wounds or sores. Current medical practice is to put silver nitrate in newborns eyes to prevent infection. Note that silver nitrate should not be ingested and is not used in our products..

What do I need to know about Colloidal Silver?

What are the uses of Colloidal Silver?

It has been used on cuts, grazes, burns, dandruff, itchy scalp, skin conditions like Psoriasis and Eczema can benefit from frequent application. Colloidal Silver does not sting and has powerful antiseptic, disinfectant and germicidal properties. It has also been shown to promote wound healing.

Mild Eye infections like “Pink Eye” are reputed to respond well to Colloidal Silver. A few drops applied at night and in the morning have been shown to quickly clear up the problem. We have had customers who have applied the First-Aid Spray to their eye and the redness and irritation subsided within a day or two.

What are the side effects of colloidal silver?

People who want to argue against the use of silver say that you will turn blue if you ingest silver, a condition called argyria (turning of the skin grayish/blue). There have only been two documented cases of argyria. The first case involved a lady named Rosemary Jacobs and the second case involved a man named Stan Jones. Both cases took place in the early 1900’s, back when there was little understanding or knowledge of the concentration levels of silver in the solution. For example, some of the colloidal silver from the 1900s had a 30% concentration which would be equivalent to 300,000 ppm (parts per million). Today we don’t have concentrations nearly that high with an average of 10 ppm to 100 ppm. What we do know is that Rosemary Jacobs took silver nitrate given to her by her doctors in the form of nose drops and that has been documented as what caused her argyria.

Now with Stan Jones, his case was caused by using colloidal silver which was his own homemade concoction. We know that colloidal silver must be made with distilled water or very clean water. Mr. Jones was using tap water and was allowing it to brew for over an hour. So most likely the concentration was extremely high and because he was using tap water he had other reactions taking place which resulted in very large particles within the concentration. With his case he was ingesting 8- ounces of this super saturated silver daily for four years. He was ingesting the 800 to 1000 times the recommended dosage of a super concentrated formula. Anything taken in excess can cause harm. Ingesting 800 times the amount of water daily could cause death>

Both cases can be attributed to poor quality silver and ingestion of extremely high amounts of silver to bring on this condition.

The statements throughout this website have not been evaluated by the Food and Drug Administration. These products are not intended to diagnose, treat, cure or prevent any disease. As with any medical issue, it is your responsibility to understand the safe application of these products and when to consult a medical professional.